Pitiful plight of orphans and orphanages in Nigeria

major humanitarian and development challenge facing Nigeria and has hampered its realization of the millennium development goals MDGs to a large extent is the increasing number of orphans and vulnerable children in the country. A visit to some of the orphanages in Nigeria shows that the impetus which was created by Nigeria’s participation of the 2002 West and central Central Africa regional workshop on orphans and vulnerable children has been neglected or was only a “Window dressing”. Although only a small percentage of Nigerian orphans finds their ways to the orphanages as most of them finds solace in the homes of family friends or relatives where they often end up being abused in many ways, the government still has to beam it search light and lend some support to the orphanages or motherless babies homes as they are often called.
Years of enquires and research has shown that some of the owners of these orphanages/motherless babies homes didn’t set them up because they have ample resources to cater for the orphans and abandoned children but for their passion for humanity and human survival. After over stretching or exhausting their resources or income many of them have to depend chiefly on public humanitarian and philanthropic donations from well meaning Nigerians and when such donation aren’t forthcoming, they often resort to all manner of activities to keep the orphanages running. Apart from the ones being and operated by some religious bodies which has definite access to regular funding, many of the orphanages/motherless babies homes operators usually engage in activities that demeans the very existence of this categories children.
In 2013, Nigeria had an estimated 7million orphans and by 2010, it was estimated that the figure went up to about 8.2million. Insurgency and HIV/AIDS pandemic has made the problem even worse, producing millions of orphans and countless vulnerable children whose rights are being violated as a result of the combined effects of the consequences of poverty, conflicts, terrorism and gender inequity. This category of children are left to experience untold economic hardship, lack of love an attention, withdrawal from school, poor health and psychological and emotional difficulties. The consequences of these on the society are a cause for great concern. Though the Federal government had rolled out drums in celebration of its achievements in the realization of the MDGs, which includes; eradicating extreme poverty and hunger, achieving universal primary education, Promoting gender equality and empowering women, reducing child mortality, improving maternal health, combating HIV/AIDS, Malaria and other diseases, ensuring environmental sustainability and, developing a global partnership for development all to a greater extend by the year 2015.
Informed Nigerians knows that this claims and premature celebration is only a “virtual” achievement. Government can not claim to have achieved most goals of the MDGs while millions of orphans are still out of school, more than 40% of Nigerians can hardly feed even once a day due to abject poverty and the health and emotional well being of orphans and vulnerable children are not prioritized. Ours is a country whose number of orphans, abandoned and vulnerable children keeps increasing almost daily. Even the last general election in Nigeria has produced orphans as a result of some parent who lose their lives. Government at various level should look beyond the “Political” achievement of the MDGs and chat a way forward towards addressing the pitiful plight of Orphans and abandoned children in this country. As a matter of deliberate policy, the Federal Government should set up a task force through the ministry of social development to liaise with the state ministries social development towards appraising the activities of Orphanages/motherless babies homes.
Educational support should be provided to the orphanages/motherless babies homes through free-school enrolment, provision of school uniforms, books, shoes and bags. Nutritional support through the provision of cost effective, locally sourced and sustainable nutritional supplements in order to address the nutritional needs of the children should be prioritized by government. Health support through the provision of preventive and promotive health care such as safe water, insecticide treated nets, regular deworming , Health education, HIV prevention and off course free medical services should be available to the orphanages/motherless babies homes as these would not only go a long way to addressing their pitiful plight but would save this counting the greet humanitarian crises that lies ahead.
Individuals and groups who operates and manage orphanages/motherless babies home have done and are doing their own part of championing the course of humanity, it is time for government at various level to give them a pat in the back, by helping them to help humanity. Corporate bodies, the well to do in the society and of course all Nigerians have a role to play at addressing the plight of orphans, abandoned and vulnerable children in our midst.
- MyNews24

Posted by Elizabeth ijojo-igboria at 16:54 No comments:

Why should i help

When you do nothing, you feel overwhelmed and powerless. But when you get involved, you feel the sense of hope and accomplishment that comes from knowing you are working to make things better.”

Posted by Elizabeth ijojo-igboria at 23:41 No comments:

Back to school project

Back to school 9ja  project is set to hold in January.

We intend to fill a back pack with these basic school supplies with your support.                   Pen&pencils,crayons,pen&pencils,pencil sharpners,eraser,drawing book,notebooks,socks .

Posted by Elizabeth ijojo-igboria at 23:38 No comments:

Back to school time is always a big transition not only for children but for parents while children are filled with excitement and first day jitters ,parents are filled with thoughts of"Am I prepared enough"?Back to school 9ja is here to help eliminate these thoughts of "Am I prepared enough?.To help eliminate these thoughts,and help you and your child prepare for 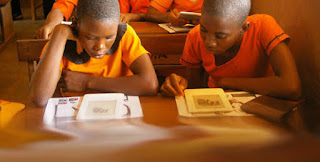 Posted by Elizabeth ijojo-igboria at 23:13 No comments:

Elizabeth ijojo-igboria
Medical student, philanthropist,advocator,blogger.I believe that every child deserves a future and a hope.Back to school 9ja may not be able to save all the children in the world but will give a future and a hope to thousands and more